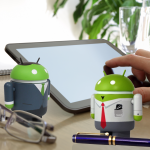 A decade ago there was no concept of a smartphone. Then iPhone came into the market and became a trend setter. Android followed after and within a short span of time took over the smartphone industry like a dark cloud takes over the sky before rain. A lot has been said about Android phone and due to its immense popularity, a huge majority of smartphone users are Android users. Lately the Android craze has been transferred to businesses as well. … END_OF_DOCUMENT_TOKEN_TO_BE_REPLACED